I’m Amanda C. Peterson. I’m the head of writing and naming for Logitech. When I’m not writing about Logitech products, I’m usually playing with them. I also spend time playing first-person shooters and puzzle games, watching classic and cult movies and goofing off online.

My best friend growing up was my family’s TV set. I remember falling off the coffee table while trying to pose as Mighty Mouse in front of the TV on Saturday morning. There was never a Christmas morning more exciting than the day my dad plugged in the big, beige cable box with the archaic red numbers and I watched the same seven videos on MTV for hours on end (since Bravo was nothing but ballet dancers and opera and took over Nickelodeon half the broadcast day). I still swoon for the “bloop bloop” sound of rewinding on TiVo to check, “Yes, they really did say that.”

So it’s with loving sincerity that I adore today – September 7, TV’s birthday. 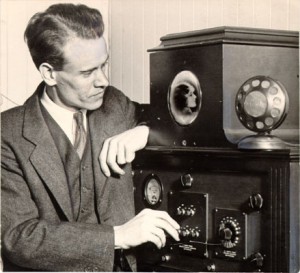 On this day in 1927, a 21-year-old inventor with the most steampunk name imaginable – Philo T. Farnsworth – demonstrated the electronic television in his small lab on Green Street in San Francisco. It was a giant machine. The picture was weak. The screen was tiny. But the invention solved some of the problems that had plagued the transmission of moving pictures up until that point.

Philo never got rich off his invention, but when it made its way to the broadcast and electronics companies, it drove both the sets people watched and the cameras that early broadcasters used to capture images. And as we all know, it revolutionized the world – quickly going from a novelty to a necessity to what FCC chairman Newton Minnow called a “vast wasteland.”

Today, TV and I are like any childhood friends. I still love it, but we’re not close like we used to be. I watch TV occasionally, usually with a laptop on my lap, often looking up what an actor has been in, fact checking a political speech, adding things to my NetFlix queue or making fun of terrible sitcoms on Twitter. Half the time, my other computer is clumsily hooked up with an HDMI cable so I can watch Hulu or a downloaded movie, using poor TV as just a dumb screen.

So I’m one of the reasons the digital home group will be thrilled to launch Revue – just to get me out of their demo rooms. And I’m excited as ever to actually love my TV again.

Happy birthday, TV. Logitech got you Revue. We know you’ll like it 😉