I’m not old enough to remember it, but when the radio was invented in the early 1900s, people would gather around to listen to their favorite music, shows and sports games. Then came television and even more so than radio, families would come together after school and work to watch their favorite shows on the TV set. Entertainment was something you could do together. 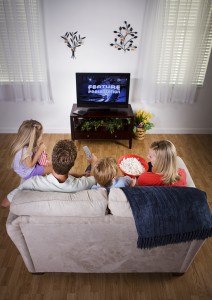 With all the personal computers and smart phones around the last decade, and in homes everywhere, it’s more common to see families scattered – with each person now fixated to a separate screen.

Yes, we had a technical vision for Logitech Revue – bringing everything together from all over the web, TV, apps and everything else. But as we started to play with early systems and talked to consumers about product concepts, we saw the possibility to bring together more than just content.

Logitech Revue with Google TV has the ability to bring people together again around the biggest screen in the home – the TV.

Remember the last time you tried to share a YouTube video with someone in the same room? Did you turn your laptop around? Cram next to each other? Go through the hassle of connecting the computer to the HDMI port on the TV? IM the link to someone who was just a foot or two away from you?

With all the content that anyone could want, Logitech Revue brings the experience of Google TV to your TV screen and combines everything on the Web, cable or satellite content, apps, video calling and more. And it can do so in smart ways that make sharing the big screen easy and fun, like providing supplemental info – for example sports scores or IMBD facts – while you watch, or picture-in-picture mode. And you’ll never have to see eight of your kid’s friends all vying for a place close to the laptop screen as they try to watch the new Harry Potter trailer together.

Does this mean that Logitech thinks you should ditch your laptop and smart phone?

Not at all (and in case you’ve forgotten, we make a lot of stuff for your laptop and we’re looking into making even more stuff for your smart phone).

There are still some things that work better on a laptop screen – like typing a word document, or a smart phone screen – like making a phone call or sending a text message. Because of these, your laptop and smart phone will continue to play a big role in your digital life. But for other things, like watching a YouTube video, learning how to cook or watching something with friends or family, we believe that your HDTV is the best screen in the house.

So go ahead, retreat to your room to finish that report or take to your smart phone to text a distant friend, but when you’re ready to see what’s on TV, head out to the living room with the rest of the family, where you’ll have all of your entertainment right at your fingertips.

For more information on Logitech Revue with Google TV, sign up at www.logitech.com/news/googletv.