Players of PC flight simulations are always looking for the most realistic experience, and the Logitech Flight System G940 delivers a new level of realism and control. The G940’s innovative design includes many firsts in flight sim controllers: 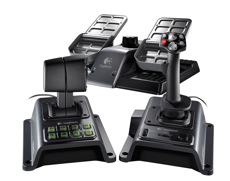 The Flight System G940 also includes many new features to enhance realism. The throttle has eight programmable panel buttons with removable caps, so they can be easily labeled with their functions. The panel buttons are illuminated, and can be software controlled to change to red, amber, green or off. This way, panel buttons can act as they do in real aircraft, changing color to indicate status or warnings, like landing gear position or engine condition.

The Logitech Flight System G940 also includes innovations to make its many controls easy to use and includes software that automatically loads profiles, configuring buttons for all popular flight sims. The profiles are easy for players to customize and modify the over 250 programmable controls and axes to work just the way they like them.

We were also recently honored by SimHQ with the award for Best Simulation Peripheral of 2009. 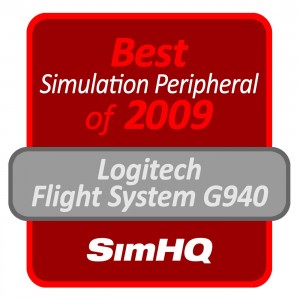 The Logitech Flight System G940 – everything you need to take to the skies.