Today marks the announcement of the new Logitech G27 Racing Wheel, which will be replacing the venerable G25 Racing Wheel. Though I’ve been seeing unofficial reports about a Logitech G27 Racing Wheel floating around the Internet since January, I’m now able to officially confirm the existence of this new racing wheel for PC and PS3. In designing it, our primary goal was to improve upon the already-great G25, focusing particularly on the number of buttons on the wheel, the feeling of the shifter module, and the sound and feel of the force feedback transmission. 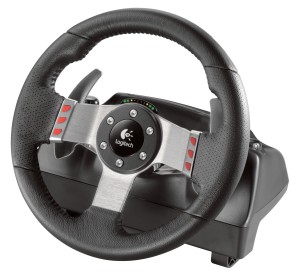 The most significant improvement is the introduction of a helical gear system to the force feedback transmission. As with the G25, the G27 features a dual-motor, single-reduction force feedback transmission supported by two sets of steel ball bearings. Instead of straight-cut (or “spur”) gears, however, we’ve developed the first force-feedback transmission for racing wheels featuring diagonal-cut (“helical”) gears. As most racing fans know, spur gears produce significantly more noise than helical gears. This is due to vibration that is created as the teeth engage and disengage quickly. Helical gears mesh much more gradually, reducing the amount of vibration experienced by each tooth and significantly reducing the noise generated. This requires that the gear and pinion system be engineered to significantly higher tolerances than a standard spur gear setup, and it results in a wheel that produces the same amount of force feedback torque as the G25 with a significant reduction in noise and improvement in turning smoothness as well.

The wheel of the G27 is 11” in diameter and is wrapped in real leather. Its spokes are made of brushed stainless steel, and it features six buttons and two stainless steel shifter paddles. The wheel also features ten LEDs just above the center hub (two red, four yellow, and four green). These LEDs can be programmed by games to act as an RPM gauge or as shift indicators. The LED SDK has been provided to several developers already, and a few titles (including the trial version of rFactor that ships with the wheel) will support the LED panel as soon as the wheel is installed.

As with the G25, the G27’s shifter features eight buttons and an eight-way D-pad. It also has two clamps with knobs that can be pushed down and recessed after the clamps are tight, and an anti-tip screw. Additionally, its internals have been redesigned to have a greater centering force and a more positive feeling for each of the gear engagement positions, so shifting by feel is significantly improved.

The pedals remain largely unchanged, with steel arms and frames and brushed stainless-steel faces, but do feature two important improvements:

1. The brake and clutch pedal standoffs have been increased in height by approximately 13 mm, so that their faces are closer to the user than that of the throttle pedal.

2. The pedal arms have had four extra holes drilled in them so that the pedal faces can adjust to the left or the right with the help of a 2.5 mm hex wrench.

Together, these two features make heel-and-toe braking significantly easier than on the G25, and give serious racers much more control over how the wheel fits their setup and racing needs.

Overall I’m pretty excited about this new wheel, as it directly addresses a number of the concerns that people have expressed to me about the G25 over the years. And, now that I can finally talk about it with the public, I’m also very interested in hearing what you think. Post a comment and let me know!

Quick Overview of differences from G25: