Today, we’re very excited to announce the new black Logitech Wireless Guitar Controller for PLAYSTATION 3 and PlayStation 2 computer entertainment systems. Back in October, I blogged about our first guitar controller, the red Logitech Wireless Guitar Controller Premiere Edition for the PS3 platform. In addition to the new black finish, the guitar we announced today incorporates a few minor construction updates based on the feedback we received from players over the last few months. It still feels great in the hands and balances comfortably on its strap, and the buttons and strum bar are as quiet and responsive as the original Premier Edition. So for those of you who did not manage to get your hands on the Premier Edition, this new guitar controller gives you a chance to find out what all the fuss is about. The Logitech Wireless Guitar Controller for PLAYSTATION3 and PlayStation2 is expected to be available in the U.S. later this month and in Europe beginning in June. 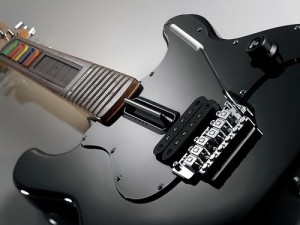 On a related note, as a keen guitar player myself, I have been very pleased to read about how Guitar Hero is being cited as the inspiration for more people to start learning to play guitars and other musical instruments, and even causing a boost in guitar sales!

Watch this space for more news on Logitech’s guitar controller lineup in the near future!